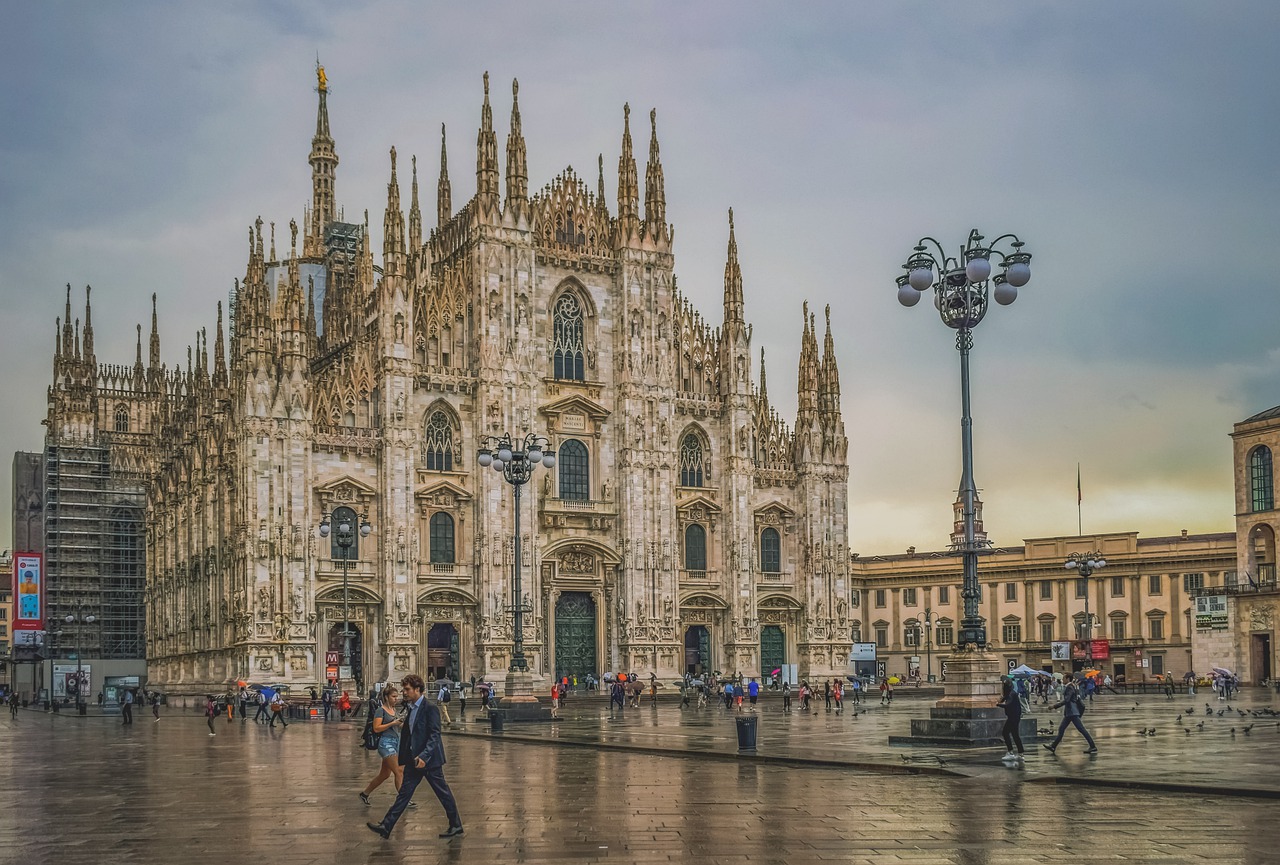 Sheraton Milan San Siro is close-by to San Siro stadium and conveniently connected to Milan’s airports. The metro station “M5 San Siro Stadio” is 10-minute walk away. The organizers have reserved some rooms at promotional prices for the participants of the conference until April 30, 2022 (Double room single use 140 €, double room 160 €, prices per night, breakfast included, excluded 10% VAT and city tax). Check availability directly with hotel.

Milan is home to many cultural institutions, museums and art galleries, that account for about a tenth of the national total of visitors and receipts. The Pinacoteca di Brera is one of Milan’s most important art galleries. It contains one of the foremost collections of Italian painting, including masterpieces such as the Brera Madonna by Piero della Francesca. The Castello Sforzesco hosts numerous art collections and exhibitions, especially statues, ancient arms and furnitures, as well as the Pinacoteca del Castello Sforzesco, with an art collection including Michelangelo‘s last sculpture, the Rondanini Pietà, Andrea Mantegna‘s Trivulzio Madonna and Leonardo da Vinci‘s Codex Trivulzianus manuscript. The Castello complex also includes The Museum of Ancient Art, The Furniture Museum, The Museum of Musical Instruments and the Applied Arts Collection, The Egyptian and Prehistoric sections of the Archaeological Museum and the Achille Bertarelli Print Collection.

Milan’s figurative art flourished in the Middle Ages, and with the Visconti family being major patrons of the arts, the city became an important centre of Gothic art and architecture (Milan Cathedral being the city’s most formidable work of Gothic architecture). Leonardo worked in Milan from 1482 until 1499. He was commissioned to paint the Virgin of the Rocks for the Confraternity of the Immaculate Conception and The Last Supper for the monastery of Santa Maria delle Grazie.

The city was affected by the Baroque in the 17th and 18th centuries, and hosted numerous formidable artists, architects and painters of that period, such as Caravaggio and Francesco Hayez, which several important works are hosted in Brera Academy. The Museum of Risorgimento is specialised on the history of Italian unification Its collections include iconic paintings like Baldassare Verazzi‘s Episode from the Five Days and Francesco Hayez‘s 1840 Portrait of Emperor Ferdinand I of Austria. The Triennale is a design museum and events venue located in Palazzo dell’Arte, in Sempione Park. It hosts exhibitions and events highlighting contemporary Italian design, urban planning, architecture, music, and media arts, emphasising the relationship between art and industry.

Milan in the 20th century was the epicentre of the Futurist artistic movement. Filippo Marinetti, the founder of Italian Futurism wrote in his 1909 “Manifesto of Futurism” (in Italian, Manifesto Futuristico), that Milan was “grande…tradizionale e futurista” (“grand…traditional and futuristic“, in English). Umberto Boccioni was also an important Futurism artist who worked in the city. Today, Milan remains a major international hub of modern and contemporary art, with numerous modern art galleries. The Modern Art Gallery, situated in the Royal Villa, hosts collections of Italian and European painting from the 18th to the early 20th centuries. The Museo del Novecento, situated in the Palazzo dell’Arengario, is one of the most important art galleries in Italy about 20th-century art; of particular relevance are the sections dedicated to Futurism, Spatialism and Arte povera. In the early 1990s architect David Chipperfield was invited to convert the premises of the former Ansaldo Factory into a Museum. Museo delle Culture (MUDEC) opened in April 2015. The Gallerie di Piazza Scala, a modern and contemporary museum located in Piazza della Scala in the Palazzo Brentani and the Palazzo Anguissola, hosts 195 artworks from the collections of Fondazione Cariplo with a strong representation of nineteenth-century Lombard painters and sculptors, including Antonio Canova and Umberto Boccioni. A new section was opened in the Palazzo della Banca Commerciale Italiana in 2012.Other private ventures dedicated to contemporary art include the exhibiting spaces of the Prada Foundation and HangarBicocca. The Nicola Trussardi Foundation is renewed for organising temporary exhibition in venues around the city. Milan is also home to many public art projects, with a variety of works that range from sculptures to murals to pieces by internationally renowned artists, including Arman, Kengiro Azuma, Francesco Barzaghi, Alberto Burri, Pietro Cascella, Maurizio Cattelan, Leonardo Da Vinci, Giorgio de Chirico, Kris Ruhs, Emilio Isgrò, Fausto Melotti, Joan Miró, Carlo Mo, Claes Oldenburg, Igor Mitoraj, Gianfranco Pardi, Michelangelo Pistoletto, Arnaldo Pomodoro, Carlo Ramous, Aldo Rossi, Aligi Sassu, Giuseppe Spagnulo and Domenico Trentacoste.

Milan is a major national and international centre of the performing arts, most notably opera. The city hosts La Scala operahouse, considered one of the world’s most prestigious, having throughout history witnessed the premieres of numerous operas, such as Nabucco by Giuseppe Verdi in 1842, La Gioconda by Amilcare Ponchielli, Madama Butterfly by Giacomo Puccini in 1904, Turandot by Puccini in 1926, and more recently Teneke, by Fabio Vacchi in 2007. Other major theatres in Milan include the Teatro degli Arcimboldi, Teatro Dal Verme, Teatro Lirico and formerly the Teatro Regio Ducal.The city is also the seat of a renowned symphony orchestra and musical conservatory, and has been, throughout history, a major centre for musical composition: numerous famous composers and musicians such as Gioseppe Caimo, Simon Boyleau, Hoste da Reggio, Verdi, Giulio Gatti-Casazza, Paolo Cherici and Alice Edun lived and worked in Milan. The city is also the birthplace of many modern ensembles and bands, including Camaleonti, Camerata Mediolanense, Gli Spioni, Dynamis Ensemble, Elio e le Storie Tese, Krisma, Premiata Forneria Marconi, Quartetto Cetra, Stormy Six and Le Vibrazioni.

Milan is widely regarded as a global capital in industrial design, fashion and architecture. In the 1950s and 60s, as the main industrial centre of Italy and one of Europe’s most dynamic cities, Milan became a world capital of design and architecture. There was such a revolutionary change that Milan’s fashion exports accounted for US$726 million in 1952, and by 1955 that number grew to US$72.5 billion. Modern skyscrapers, such as the Pirelli Tower and the Torre Velasca were built, and artists such as Bruno Munari, Lucio Fontana, Enrico Castellani and Piero Manzoni gathered in the city. Today, Milan is still particularly well known for its high-quality furniture and interior design industry. The city is home to FieraMilano, Europe’s largest permanent trade exhibition, and Salone Internazionale del Mobile, one of the most prestigious international furniture and design fairs.

Milan is also regarded as one of the fashion capitals of the world, along with New York City, Paris, and London. Milan is synonymous with the Italian prêt-à-porter industry, as many of the most famous Italian fashion brands, such as Valentino, Gucci, Versace, Prada, Armani and Dolce & Gabbana, are headquartered in the city. Numerous international fashion labels also operate shops in Milan. Furthermore, the city hosts the Milan Fashion Week twice a year, one of the most important events in the international fashion system. Milan’s main upscale fashion district, quadrilatero della moda, is home to the city’s most prestigious shopping streets (Via Monte Napoleone, Via della Spiga, Via Sant’Andrea, Via Manzoni and Corso Venezia), in addition to Galleria Vittorio Emanuele II, one of the world’s oldest shopping malls.

In the late 18th century, and throughout the 19th, Milan was an important centre for intellectual discussion and literary creativity. The Enlightenment found here a fertile ground. Cesare, Marquis of Beccaria, with his famous Dei delitti e delle pene, and Count Pietro Verri, with the periodical Il Caffè were able to exert a considerable influence over the new middle-class culture, thanks also to an open-minded Austrian administration.

In the first years of the 19th century, the ideals of the Romantic movement made their impact on the cultural life of the city and its major writers debated the primacy of Classical versus Romantic poetry. Here, too, Giuseppe Parini, and Ugo Foscolo published their most important works, and were admired by younger poets as masters of ethics, as well as of literary craftsmanship. Foscolo’s poem Dei sepolcri was inspired by a Napoleonic law that—against the will of many of its inhabitants—was being extended to the city.

In the third decade of the 19th century, Alessandro Manzoni wrote his novel I Promessi Sposi, considered the manifesto of Italian Romanticism, which found in Milan its centre; in the same period Carlo Porta, reputed the most renowned local vernacular poet, wrote his poems in Lombard Language. The periodical Il Conciliatore published articles by Silvio Pellico, Giovanni Berchet, Ludovico di Breme, who were both Romantic in poetry and patriotic in politics.

After the Unification of Italy in 1861, Milan lost its political importance; nevertheless it retained a sort of central position in cultural debates. New ideas and movements from other countries of Europe were accepted and discussed: thus Realism and Naturalism gave birth to an Italian movement, Verismo. The greatest verista novelist, Giovanni Verga, was born in Sicily but wrote his most important books in Milan.

In addition to Italian, approximately 2 million people in the Milan metropolitan area can speak the Milanese dialect or one of its Western Lombard variations.

Milan is an important national and international media centre. Corriere della Sera, founded in 1876, is one of the oldest Italian newspapers, and it is published by Rizzoli, as well as La Gazzetta dello Sport, a daily dedicated to coverage of various sports and currently considered the most widely read daily newspaper in Italy. Other popular local dailies are the general broadsheets Il Giorno, Il Giornale, the Roman Catholic Church-owned Avvenire, and Il Sole 24 Ore, a daily business newspaper owned by Confindustria (the Italian employers’ federation). Free daily newspapers include Leggoand Metro. Milan is also home to many architecture, art, and fashion periodicals, including Abitare, Casabella, Domus, Flash Art, Gioia, Grazia, and Vogue Italia. Panorama and Oggi, two of Italy’s most important weekly news magazines, are also published in Milan.

Like most cities in Italy, Milan has developed its own local culinary tradition, which, as it is typical for North Italian cuisines, uses more frequently rice than pasta, butter than vegetable oil and features almost no tomato or fish. Milanese traditional dishes includes cotoletta alla milanese, a breaded veal (pork and turkey can be used) cutlet pan-fried in butter (similar to Viennese Wiener Schnitzel). Other typical dishes are cassoeula (stewed pork rib chops and sausage with Savoy cabbage), ossobuco (braised veal shank served with a condiment called gremolata), risotto alla milanese (with saffron and beef marrow), busecca (stewed tripe with beans), and brasato (stewed beef or pork with wine and potatoes).

Season-related pastries include chiacchiere (flat fritters dusted with sugar) and tortelli (fried spherical cookies) for Carnival, colomba (glazed cake shaped as a dove) for Easter, pane dei morti (“bread of the (Day of the ) Dead”, cookies flavoured with cinnamon) for All Souls’ Day and panettone for Christmas. The salame Milano, a salami with a very fine grain, is widespread throughout Italy. Renowned Milanese cheeses are gorgonzola (from the namesakevillage nearby), mascarpone, used in pastry-making, taleggio and quartirolo.

Milan is well known for its world-class restaurants and cafés, characterised by innovative cuisine and design. As of 2014, Milan has 157 Michelin-selected places, including three 2-Michelin-starred restaurants; these include Cracco, Sadler and il Luogo di Aimo e Nadia. Many historical restaurants and bars are found in the historic centre, the Brera and Navigli districts. One of the city’s oldest surviving cafés, Caffè Cova, was established in 1817. In total, Milan has 15 cafés, bars and restaurants registered among the Historical Places of Italy, continuously operating for at least 70 years.